Rachel talks about her favourite Lingerie for Pole Dancing

Rachel manages the Simply Pleasure store in Loughborough. She likes good Coffee, Good Food and Great Sex. In her free time she enjoys Pole Dancing which has led her to occasionally work as a Stripper.

In this article, she talks about her favourite Lingerie outside of the bedroom and practising twerking to an audience!

A one-piece is my favourite type of Underwear. I don’t have to hunt around my drawer for the other part to a set - once had a lovely baby pink set that I washed in separate washes and one of the reasons a lot of underwear is hand wash only is my briefs went a dusky shade of pink on the hot wash but the bra is still bright. Both still looked fine but were no longer a set.

Moving on from my washing disasters lets discuss this teddy!

Baci Lingerie Lace Teddy
On, it looks sexy - It fits well, sometimes I worry that with small boobs the tops aren’t going to look right but I still felt sexy in this. However, I spent far more time than I needed to trying to make the tie at the back look nice. Although I did feel enough of my bum was on show to distract whether I’d managed to tie a symmetrical bow.

My partner actually loves the ties and being able to slip me out of this, and he thinks it looks sexy on. Being able to adjust the neck gave the top of the teddy a snug fit without being too uncomfortable on the neck. It’s made from 90% Nylon, 10% Spandex but the feel was soft. The elasticity allows for easy movement without disturbing the look, but I wouldn’t sleep in as it would definitely add some strain to your neck especially for the fuller chested.

4/5 Very sexy and shows off all the right places without showing everything! The three fastenings make it something you can’t just throw on quickly which stopped me giving it a 5 – but you can certainly slip out of it quick enough, which is the important bit.

In my wardrobe full of sexy wares this is one of my favourites.

Baci Lingerie Corset Front Suspender Fishnet Bodysuit Black
Considering everything is on show it covers enough that I feel fully confident. It can be worn with or without underwear to change up the look, I like to go for none as it makes it much easy for access and you don’t want to have to take the whole thing off just because you’ve got a g-string in the way!

The sizing is generous although one size fits all there is a queen size option for if you need the extra room. I take a size 10 and found there to be plenty of stretch left but the elasticity didn’t let it sit loose.

The best part about this is it fold up small but doesn’t crease so it is great to sneak in your bag for a weekend away. It’s again an all in one piece which we know I am a fan of.

Having stockings attached to the main event is something I’m a huge fan of. This one is 93% Nylon, 7% Spandex so similar in feel to the teddy. Although just as soft I personally think this feel more elasticated even with the less Spandex. It’s like wearing tights that pull right up over your shoulders but certainly not as restricting. I feel very confident in this, the elasticity holds in areas I have insecurities about and everything is essentially covered whilst having it all on show.

My partner loves this one and if he sees me with fishnets sticking out of a maxi dress he knows when we get home he’s got a treat in store. Probably the only flaw I can find with this is what happens if you fall asleep in it, you’ve got toes suddenly wearing all sorts of fishnet thongs. Not comfortable! However I did expect a boob to pop through the cross hatch but I was safe there. I can imagine the dress version of this that is stocked wouldn’t make the worse nightdress, although I am personally pro sleeping naked.

5/5 I’m yet to find something I wear as much as this and that gives me the option to create so many different looks.

Lapdance is a great brand because of the range of colours. They really pop and are great to wear to clubs and parties. Although a similar sizing system to Baci with onesize “fits most” and a plus size for more give, I found this a lot tighter.

lapdance leopard lace mini dress pink
I loved the tight fit over my bum but I can’t imagine any bigger than my size 10 would have much give. Looking at the queen size I would say again it doesn’t look overly big and you’re looking at a 12-16 fit.

The hearts that are situated on the nipple area unfortunately didn’t quite sit central on me but that didn’t make them look out of place. The fishnet panel at that back is also higher than I would have liked, only showing the top of my bum which is a sexy tease but not as full on as I personally like my lingerie.

On, this looks amazing and is very easy to slip off, that’s if you decide to take it off! This is one of my partners favourites I thought it was because it was different to my drawer full of black pieces but when I asked him he said this is the one I’ll wear outside of the bedroom the most. And he’s right, it’s so comfortable that I will just walk around the house carrying on my day to day life in it, even if it does slowly start to get shorter with movement – no complaints from him on that point though.

It’s made of cotton but I wouldn’t say it’s any softer than the other two, it’s more the fit and the fact nothing is tied up or restricting in any way. I’ll even happily fall asleep in this number although it will roll up like a vest top by the time I wake up which is probably for the best because I do think given too much strain my bum may test the strength of the cotton, which is something to consider if leaving it on for any sort of play as well.

Still I’ve had more than one wear out of it and it’s still holding strong so I may not being giving it the credit it deserves.

4/5 I was lucky with the fit so for me this was great but as mentioned this isn’t as generous as Baci so you really need to take this out of the box to have a look. I love that it comes in two choices of colours because I will probably have to get the black now I’ve been won over. 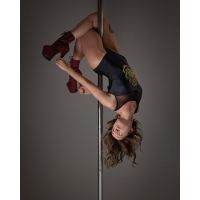 Sign up to our emails & Save 15% off your order